It has been a while since I have written one of these but I will try to get back to a regular schedule. However, I do feel we have a crisis in America that is tearing the fabric of society apart little by little. I do feel it’s a crisis of leadership somehow I can’t find them. Nor can everyday, hard-working Americans. 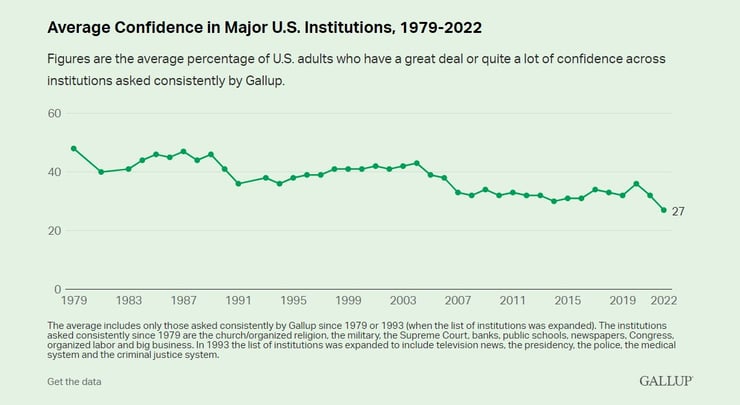 Just have a look at this Gallup poll of U.S. adults it just approached all-time low for ““confidence in major U.S. institutions,” and this survey has been around the block for some time 43 years to be exact. The party doesn’t stop there we see confidence declining across the board from banks to police to small businesses -in Americans reporting a “great deal/quite a lot” of confidence in American institutions. 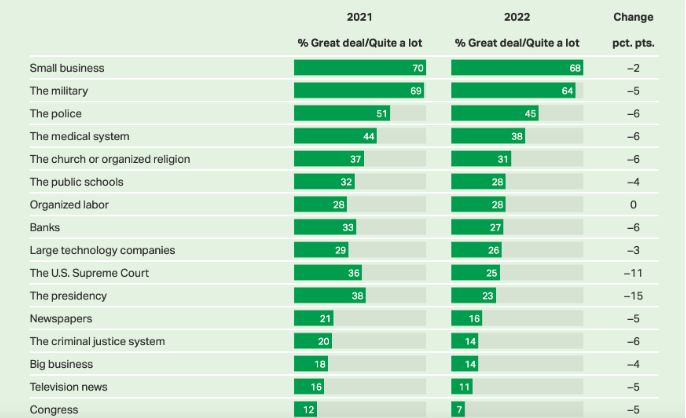 The biggest decline? The U.S. presidency.

It’s easy to understand why. Statements like what Press Secretary Karine Jean-Pierre said this week (“We are stronger economically than we have been in history”) directly undermine the President.

Seriously, does the White House actually think Americans aren’t aware that U.S. inflation just hit a four-decade high? Come on now. (I could go on and on about the White House but I digress.)

What the Gallup poll data reveals is that bending the truth isn’t isolated to the White House. In the investing community, for instance, the Federal Reserve just spent the last year and a half telling us that inflation was “transitory.” The Fed didn’t drop the term “transitory” until inflation had already hit 7.1% towards the end of 2021.

In a shocking bit of truth-telling this week, Fed Governor Chris Waller spilled the beans when asked “How did the Fed screw up so much last year?.” Here’s the quote:

“We didn't do a good job of risk management. ‘We bet the farm’ on inflation coming down. We should have been asking, ‘What if it doesn't come down?’ We had to do an abrupt and fast pivot to try to catch up.”

There you have it. So now the Fed is aggressively tightening monetary policy to catch-up to inflation risks they dismissed during all of 2021.

The disconcerting bit is what the Fed is saying now. They’re aggressively hiking rates while insisting they don’t see a recession on the horizon.

So let’s get this straight. After the Fed said inflation was "transitory" for all of 2021, we’re supposed to trust them that there’s no risk of recession today? Meanwhile, the Atlanta Fed’s own “GDP Now” forecast just moved lower to -2.1% in Q2 growth. In other words, the Atlanta Fed is forecasting… wait for it… a recession!! (Back-to-back quarter-over-quarter negative GDP prints is the traditional measure of a recession. The actual Q1 2022 GDP print was -1.6%.)

Once again that brings us back to why the Gallup poll’s confidence in U.S. institutions just hit an all-time low. The average American isn’t fooled by Fed or White House BS about the supposed “strength of the U.S. economy.” Get this. Google search interest for the word “recession” just eclipsed “inflation.”

Go figure. In my opinion “Winter is Coming” How mild or harsh it will be is anyone’s guess . However, since we are on the subject of “Game of Thrones” I am very much looking forward to watching “House of Dragons” that will be released later this August.

It was a rough month for equities in the US and around the world, with the S&P 500 tumbling 8.3% in June. The Dow Jones Industrial Average was off only 6.6%, matching the performance of the MSCI Emerging Markets index, and the NASDAQ fell 8.7% in June. The Russell 1000 and Russell 2000 posted similar drops of 8.4% and 8.2%, respectively. Red-hot inflation coupled with a global effort among central banks to tame price increases by rapidly hiking rates have been a few key drivers of 2022’s declines. For the first half of the year, the Dow is 14.4% lower, while the S&P 500 and NASDAQ are both in bear market territory, down 20% and 29.2% respectively.

As a result, not a single sector ended June in the black. Energy took the largest hit, ending June 17.1% lower, and it was joined by Consumer Discretionary, Financials, and Materials, which all sank at least 10%. Consumer Staples and Health Care, sectors that are typically less sensitive to Fed rate hikes, were the only two trimmed by less than 3%.